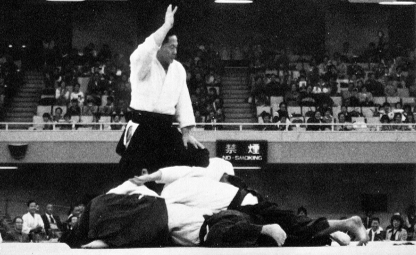 PRACTICE OF THE DAITO-RYU AIKIBUDO

Those who practice the Daito-ryu Aikibudo must learn the Aikijujutsu which is its base. Aikibudo includes kenjutsu, yarijutsu, bojustu, juttejutsu and the other secrets; to use one's own energy in the most effective way, unknowingly using the enemy's strength, without weapons, with only the forces of mind and body, and to be flexible without having to depend on weapons.

Because of the fundamental principle that only with the practice of jujutsu it is not possible to learn the true essence of the Daito-ryu, I called the art Daito-ryu Aikibudo, especially because I, who have trained with my father even in the body to body than in the sword, perfectly realize to have to transmit the Ono-ha Itto-ryu kenjutsu which was transmitted at Aizu together the aikijujutsu, arts that are now only here with us (at Abashiri). 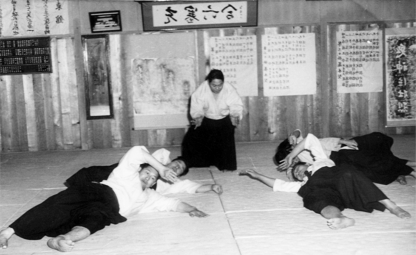 Another name of Aikijujutsu is Gotenjutsu (御殿術), which is a mortal combat in a situation of life or death. It is an art, both defensive and offensive, executed reading the ki of the opponent and responding accordingly with a combination of atemi, shime, nage and aikinojutsu techniques. Since [the Aikijujutsu] could be dangerous it is necessary to practice it with much attention (and the instructor must take great care in how the impacts these teachings).

Aikijujutsu teaches [self-defense] without the use of weapons. Since the students endeavor daily [in the practice], it is necessary to explain [the techniques] in a simply way. The art must be practiced with the objective of training our students to become fine and upstanding citizens to our Country; the training is in any case very deep and for this reasons it requires a great force of will. Recklessness is the main enemy and one must never lose the martial spirit. It is necessary to always continue. [the practice]

In Daito-ryu are kept the secrets of aiki. Life depends on ki, therefore the ki has to be developed. With the right way of breathing one can properly the ki use and succeed in high states mental concentration. Developing a determined and courageous spirit, one can obtain an almost divine mental state and be in position of understanding, based on the nature of the ki that he encounters [a opponent], of how to act and manage the situation. Thus the attack of an opponent can almost be anticipated.

From the natural position, sensing our opponent's ki, we must like flow of water and, using the force of the enemy, throw him in whichever direction we choose. Aikinage is an application of Aikijujutsu and is the technique that allows one to deprive the opponent of his ki with just a movement, without the use of atemiwaza, kansetsuwaza or shimewaza.

In means reaching a calm state through the closing of your hands into fists, and correct breath inhalation. Yo instead is to exhale completely while opening the again. Thanks to the way of breathing, the Aiki-in-yo-ho, the mind is focused and the gaze is more penetrating; one will therefore succeed in maintaining his courage and manipulate his opponents in almost supernatural way using only the ten fingers of his hands.

This is an alien concept in Aikijujutsu does not exist kamae. For the beginners it is important to practice with some kamae, but in reality the body does not have a preordered position, but natural ones, so that in whichever situation it is found, one succeeds freely in facing the opponent, from whichever direction he is calmly from, both in defense and in attack; it would be nonsense to hinder the flow of the technique just because one is frozen in a kamae. Thus, with the practice and tranquillity, in our spirit, it will be possible to fight in any situation we find ourselves in.

It is practiced in couples and when the partner grabs our wrists, one must try to focus the ki in the armpits, the legs and fingertips: then we will be able to throw the opponent in every direction. Since this is a training in also improve our breathing, it is important that both [the students] practice without making too much use of force; it is also possible to practice without a single hand. The aim of this exercise is to reinforce properly the ki and muscular power.

Kiai in the situation in which the opponent becomes involved by my ki-ai. As an example the shout (Ehi, Toho, Hath, Iehii, Ihaa) increases each one's courage and consequently allows to deal your with opponent at will, scaring him psychologically and leading him in a discouraged state, unable to offer any resistance.