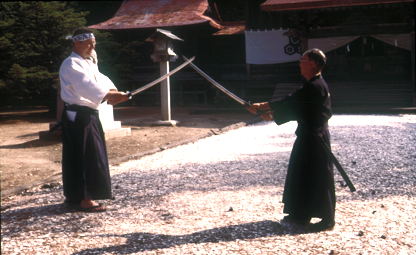 THE ART OF KENJUTSU

Why kenjutsu practice? Advantage which do I get?
» Tokimune Takeda wrote:

"Because of the fundamental principle that only with the practice of the jujutsu it is not possible to learn the true essence of the Daito-ryu, I called the art Daito-ryu Aikibudo, especially because I, who have trained with my father even in the body to body than in the sword, perfectly realize to have to transmit the Ono-ha Itto-ryu kenjutsu which was transmitted at Aizu together the aikijujutsu, arts that are now only here with us (at Abashiri)..." 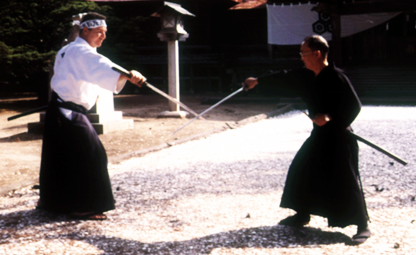 THREE AREAS THAT MAKE UP THE KENJUTSU

The program of kenjutsu techniques studied in Daitokai is:

Kendogata #10 kata. These kata are a modern introduction (in around 1912), developed to retain a direct relationship of modern kendo with ancient schools of kenjutsu. To create the Nihon kendonogata some kata were chosen among those over charged from the famous ryu-ha at that time. The 5 representatives of the various ryu-ha representatives for their creation were: Naito Takaraharu → Hokushin Itto-ryu, Mona Tadashi → Hokushin Itto-ryu, Neigishi Shingoro → Shinto Munen-ryu, Shinpei Tsuji → Jiki Shinkage-ryu, Takano Sasaburo → Ono-ha Itto-ryu.
Kata are fixed patterns that teach kendoka the basic elements of swordsmanship. The kata include fundamental techniques of attacking and counter-attacking, and have useful practical application in general kendo. There are ten Nihon Kendo Kata. Kata were originally used to preserve the techniques and history of kenjutsu for future generations. Nihon Kendo Kata were standardized in 1912 by combining the kata of many kenjutsu schools into one set.

Gogyonogata #5 kata. Formalized by Takano Sasaburo in around 1904. Originally part of the Itto-ryu curriculum they include some of the movements, concepts and strategies of the more advanced kata of the Itto-ryu. [ The original kata are 5 odachi + 3 kodachi ] Are called the kata of  ”five principles“. Gogyo no kata are a set forms that were devised by Takano Sasaburo and taught in the Tokyo Koto Shihan Gakko (Tokyo Higher Normal School) in around 1904. These kata were modified forms of kata taken from Ono-ha itto-ryu, of which  Takano Sasaburo was an exponent.

Ono-ha Itto-ryu Takeda-den
Takeda Sokaku introduced in the school curriculum of the Ono-ha Itto-ryu kenjutsu widespread at the Aizu clan (along with the Mizoguchi-ha Itto-ryu) and he was of the greatest exponent. Ono-ha Itto-ryu is the oldest of the many Itto-ryu styles which branched off from Ittosai Kagehisa´s original art. It continues to be one of the most influential of the traditional kenjutsu styles today, exerting a major influence, along with Hokushin branch, upon modern kendo´s kata, tactics, and aesthetic. Ono-ha was founded by Ittosai's immediate successor, Ono Jiroemon Tadaaki (1565–1628), from whence the name of the art is derived. Oral tradition indicates that Ittosai made Tadaaki fight a serious duel with another student, Zenki, in order to establish a successor to the style.

1. Bokuto 木刀
The bokuto is the wooden reproduction of the Japanese katana and preserves its shape, balance and weight. In the Ono-ha style the bokuto has precise parameters that distinguish it from the bokuto of other styles:
specific kissaki, a shallow sori and a greater weight.

2. Oni-kote 鬼甲手
Also called the "gloves of the demon" they are sturdy gloves (kote) specific to the style. In fact all the kata end with a real strong blow with the bokuto on the arm protected by the glove.