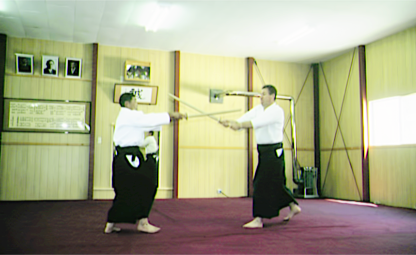 Ono-ha Itto-ryu is a traditional kenjutsu school (a sub-style of the Itto School) created around 1580 by Ono Tadaaki. Ono was a disciple of Ito Ittosai, who in turn founded the Itto-ryu. Ono-ha Itto-ryu was the Shogun’s kenjutsu school until the Meiji restoration (1868). The senior captains and commanders of the Tokugawa Shogun guards came from the Aizu clan that were taught this Kenjutsu stile. Takeda Sokaku (1860-1943) learned this sword style not from his family, but from Toma Shibuya in Aizu at the Yokikan dojo.

Sokaku then left to go on a period of austere training where he travelled, fought and trained at the schools of many teachers, a not uncommon practice of the time. Reputedly, Sokaku spent some time as a live-in student of Kenkichi Sakakibara, headmaster of the Jikishinkage-ryu and considered to be one of the most famous and skilled swordsmen of the era. 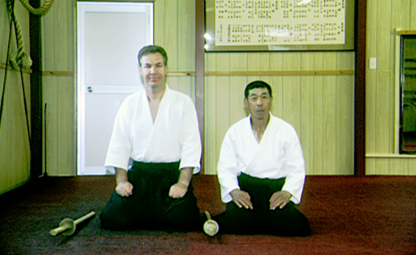 [...] The Ono-ha Itto-ryu of Shibuya Toma was transmitted in the castle of Edo by Ono Jiroemon Tadatsune to Hoshina Masayuki an since then it has always been transmitted by daimyo of Aizu [...]
[...] The members of the family Shibuya had been occupying the role of trusted doctors of the damyo of Aizu since different generations, and had in the Sakashitacho area the dojo Yokikan where ha taught the Ono-ha Itto-ryu Toma sensei [...]
[...] Among the several certificates of Takeda Sokaku there's one written at the beginning with the following delivery : “Takeda Sokaku director of the central branch (Honbu-cho) of the Daito-ryu Jujutsu, 63 Oaza Onikeda Hirose-mura Kawanuma-gun Fukushima-ken, Shibuya Toma´s pupil, once Hanshi of Aizu and of the Ono-ha Itto-ryu” [...]

Takeda Sokaku was named Aizu’s "tengu" for his formidable fencing ability (in feudal Japan a tengu are a type of legendary creature found in Japanese folk religion and are also considered a type of Shinto god (kami) or yokai (supernatural beings). Naturally Sokaku transmitted to his son Tokimune (1915-1993) his fencing knowledge, which, in turn taught Ono-ha Itto-ryu kenjutsu to his disciples. Today at the dojo of Abashiri it is practiced in the traditional style of kumidachi, which is a particular manner of representing sword fighting in Japan. Students who train make use of bokuto (which is a wood imitation of the katana). The uchidachi (who is the student guiding the kata) wears thick gloves called "Onigote". 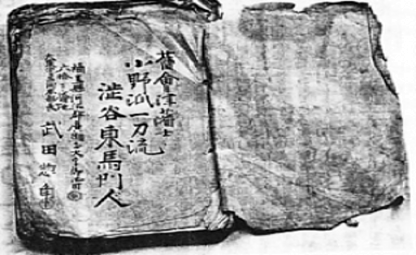